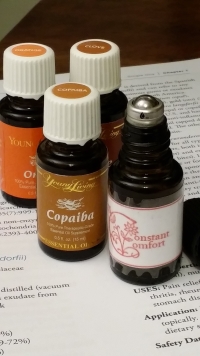 One of my favorite copaiba concoctions reminds me of the Constant Comment tea one of my friends used to drink. This blend DOES smell…so good it often evokes comments when I am wearing the blend!

Drop oils into palm of hand and stir 3 times with opposite hand. Apply as needed. This blend is warm, so if it is uncomfortable, layer on a good vegetable carrier oil to cool things down.

These oils can be blended together ahead of time. Just add equal parts of each oil in the order given in an empty 5 or 15 ml bottle. Dilute with a carrier oil if you choose. For example, to a 15 ml bottle, add 40 drops of each oil and then top it off with V-6 carrier oil…it will be approximately a 50% dilution. Add an AromaGlide Roller to the bottle for easy application to those spots that need some comfort.

These oils are also a warming addition to water or tea. What a delicious way to support your immune system as you drink more water!

When Young Living introduced copaiba (pronounced koh-pah-EE-bah…the emphasis is on the EE) several years ago, it was extolled for its many health supporting benefits. Here are a few reasons why copaiba is noteworthy:

55% Beta Caryophyllene: Beta caryophyllene supports the body’s natural response to irritation or injury.  Copaiba contains the highest amounts of beta caryophyllene of any known essential oil! This makes copaiba a great option when dealing with minor physical discomfort we all get from working and playing too hard. It also provides the same soothing support to the digestive tract when taken internally.  (Need more information on this amazing molecule?  Do a Google or PubMed.gov search!)

Emotional Support: Due to the high sesquiterpene levels in copaiba, it often contributes to feelings of emotional balance.

Magnifier: Copaiba is also known as a magnifier, or potentiator. When copaiba is used with another essential oil, it will increase the beneficial properties of that oil. With the addition of copaiba, you may have excellent results with using less oil than you normally would.

Obviously, I ordered this oil as soon as possible to try it for myself!

When I opened the bottle, I immediately knew I was going to love it. Here’s why…it almost has no smell! (To me, copaiba has a very soft, light wood scent which at first whiff is barely noticeable.)

At that time, my husband did not like the smell of most essential oils. The only oils I could wear in his presence without negative comments were the citrus oils…and that was probably because I didn’t announce to him that I was wearing them. He was a hard nut to crack. 😉 (Update: Now he doesn’t complain when I wear oils and even asks for them sometimes!)

Copaiba quickly became one of my go-to oils, especially when I was going to be out in public. Sometimes it was just copaiba alone, or other times I layered it on top of the other oils I was wearing. (Whatever I thought I could get by with…my husband’s “sensitivity” over the oils made me hyper-aware that others may not appreciate the oils as much as I did.)